STAY UP TO DATE

Over the last 20 years, the United States has implemented a ballistic missile defense (BMD) policy to protect against long-range missile strikes from abroad, including North Korea and Iran. However, this policy does not typically apply to other major nuclear powers like China and Russia due mainly to the political ramifications and the technical and fiscal issues that would arise. This protection effort also extends to defending our troops and interests overseas from attacks that would come from ballistic or, to a lesser degree, cruise missiles. 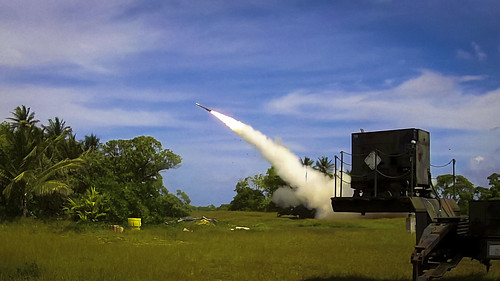 The PAC-3 system includes a single hit-to-kill interceptor missile launched from a mobile station containing a maximum of 16 PAC-3 missiles. The missile doesn’t have targeting capabilities onboard but instead receives its targeting data from a control station on the ground. As a result, the PAC-3 intercepts short- and medium-range ballistic missiles in the terminal stage but at lower altitudes than the THAAD system described below.

While in space, the EKV will separate from the booster and use radar updates and onboard visual and infrared sensors to track its target. The purpose of the EKV is to collide with the target and destroy it, a process known as kinetic kill or hit-to-kill. As such, the goal of the GBI is to counter strategic ballistic missile warheads while they are in the midcourse stage.

Aegis Ballistic Missile Defense (BMD)
The Aegis system comprises the RIM-174 Standard Missile-6 (SM-6), RIM-161 Standard Missile-3 (SM-3), and the Aegis combat system. This BMD is another kinetic or hit-to-kill system consisting of a three-stage booster and a kill vehicle. The SM-3 component is a kinetic kill missile and has three variations — block IA, block IB, and block IIA — with each variation deploying in different stages.

The SM-6 is an advanced version of the SM-3 with a more extensive range and more firepower. This Aegis system is sea-based and consists of missile launchers and radars typically mounted to destroyers and cruisers but can also be adapted to land-based systems.

The U.S. Navy provides the Aegis, which is crucial to Asian and European defenses. Additionally, the Aegis BMD creates an effective defense against ballistic missiles with short, medium, and intermediate ranges while in the ascent stage.

Terminal High Altitude Area Defense (THAAD)
The main components of a THAAD system are an interceptor missile using a single booster rocket and a kill vehicle that separates in flight. This radar unit can differentiate between differing incoming missiles and infrared sensors to detect and target.

Consider the structure of THAAD batteries which consist of four parts: the launcher, interceptors, radar, and fire control. Each battery can contain between 48 and 72 interceptors, with eight interceptors for each launcher and six to nine launchers. As a result, THAAD picks off short- and medium-range ballistic missiles in the terminal stage of the midcourse phase, either within or beyond the atmosphere.

Space-Based Infrared System-High (SBIRS-HIGH)
The SBIRS-HIGH consists of two main elements: geosynchronous satellites in orbit around the earth and sensors installed on host satellites traveling in a highly elliptical earth orbit. The main objective of the SBIRS-HIGH system is to provide preemptive alerts for any missile launches against our interests, foreign and domestic. This system will also supply data for battlespace awareness and technical intelligence.

Next-Generation Systems
The United States is working to advance our missile defense systems to stay ahead of the development of missile threats from other nations. A few developing technologies include ones that failed in the past. These examples include lasers fired from the air to destroy missiles early on after launch.

Multi-object Kill Vehicle
Multiple contractors are currently developing a defense system that can fire several kill vehicles from a single vehicle. This missile architecture permits the destruction of decoys and warheads all at once.

Boost Phase Laser Defenses
Although attempted unsuccessfully, lasers could still serve as effective kill-vehicle attacking missiles while in a boost phase. The idea is to take drones and mount high-power solid-state lasers to them. Another possibility is to weaponize an F-35 fighter jet with one of these lasers to intercept in the boost phase.

Left of Launch
This strategy would employ measures to counter any missile threats before launch, thus eliminating the need for costly counter missiles to intercept the threat. The idea behind this strategy would be to use cyberattacks and electronic warfare to cripple the launching systems before any launch takes place.

Space-Based Sensor Layer
As the name suggests, this system would appear high in space and offer regional detection and tracking capabilities from above the ground. This system would be able to attack targets that currently are difficult to detect, such as hypersonic missiles, and would be able to identify missiles while in the boost or burnout stages.

The hope is that this space-based sensor layer would also detect missiles in the midcourse phase by contrasting against the background of space to track and delineate missile threats and send data to another defense system for interception. Lastly, the space-based sensor layer would also determine whether an intercept attempt was successful or not.

This multifaceted approach with various launch vehicles and mechanisms gives the intelligence and military community planners a plethora of tools and options based on what’s necessary for any given circumstance and how to implement these various systems most effectively.

The U.S. government creates and upgrades defense systems to anticipate any possible threat and protect its citizens from danger.